By Tanja Folnović | Blog, Farm Business Comments are Closed | 27 October, 2015 | 0
Soil degradation, a decline in soil quality caused by human activities, has been a major global issue during the 20th century and will remain high on the international agenda in the 21st century. The importance of soil degradation among global issues is enhanced because of its impact on world food security and quality of the environment.High population density is not necessarily related to soil degradation; it is what a population does to the soil that determines the extent of degradation. People can be a major asset in reversing a trend towards degradation. However, they need to be healthy and politically and economically motivated to care for the soil, as subsistence agriculture, poverty and illiteracy can be important causes of soil and environmental degradation. Land degradation can be considered in terms of the loss of actual or potential productivity or utility as a result of natural or anthropic factors (water and wind erosion, salinization, and crusting or compaction); it is the decline in land quality or reduction in its productivity. In the context of productivity, soil degradation results from a mismatch between soil quality and soil use.Mechanisms that initiate soil degradation include physical, chemical, and biological processes. Important among physical processes are a decline in soil structure leading to crusting, compaction, erosion, desertification, anaerobism, environmental pollution, and unsustainable use of natural resources. Significant chemical processes include acidification, leaching, salinization, decrease in cation retention capacity, and fertility depletion. Biological processes include reduction in total and biomass carbon, and decline in land biodiversity. Soil structure is the important property that affects all three degradative processes. Thus, soil degradation is a biophysical process driven by socioeconomic and political causes. 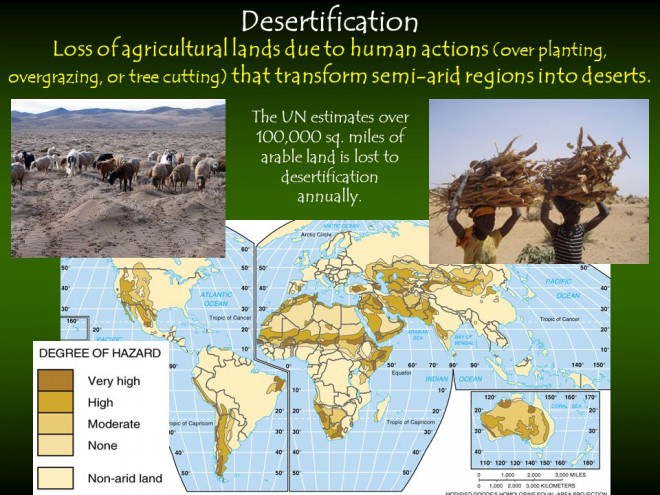 What are the causes of soil degradation?

The loss of farm land has been caused by a number of factors, many or most of which are tied to human development. The primary causes are:

The following figure illustrates the relative sizes of the causal mechanisms as a function of region.

On the global basis, the soil degradation is caused primarily by overgrazing (35%), agricultural activities (28%), deforestation (30%), overexploitation of land to produce fuelwood (7%), and industrialization (4%).

6.2 million sq. mi (16 million sq. km) are currently used to grow crops — an amount of land about equal to the size of South America — while 11.6 million sq. mi (30 million sq. km) has been set aside for pastureland, an area equal to the entire African continent. Altogether that’s more than 40% of the dry land on the planet. We use 60 times more land to grow and raise food than we do to live on. Farming takes half the world’s available freshwater, much of which is used for irrigation. And all that activity — plus the deforestation and degradation that tends to go hand in hand with farming — helps make agriculture the single biggest source of manmade greenhouse gasses, more than industry or transportation or electricity generation.

Will the topsoil run out?

Some experts fear the world, at its current pace of consumption, is running out of useable topsoil. A rough calculation of current rates of soil degradation suggests we have about 60 years of topsoil left. Some 40% of soil used for agriculture around the world is classed as either degraded or seriously degraded – 70% of the topsoil, the layer allowing plants to grow, is gone. Because of various farming methods that strip the soil of carbon and make it less robust as well as weaker in nutrients, soil is being lost at between 10 and 40 times the rate at which it can be naturally replenished. Even the well-maintained farming land in Europe, which may look idyllic, is being lost at unsustainable rates. Degraded soil

Degraded soil mean that we will produce 30% less food over the next 20-50 years. This is against a background of projected demand requiring us to grow 50% more food, as the population grows and wealthier people in countries like China and India eat more meat, which takes more land to produce weight-for-weight than, say, rice.

This figure illustrates how pervasive is the problem of soil degradation. No continent is free from the problem. Areas of serious concern include zones where up to 75% of the topsoil has been lost already.

Soil degradation will remain an important global issue for the 21st century because of its adverse impact on farm productivity, the environment, its effect on food security and the quality of life.

There’s a lot we can do, we just have to choose to do it and provide the right support where it is needed. First-off is getting of carbon back into the soil, by reversing bad farming practices like tillage, nutrient mismanagement, removing stubble and over-grazing. We can add manure and consider using human waste from cities as fertilizer, instead of just flushing it all out to sea. Another important thing is crop breeding, which needs to focus more on human nutrition as well as productivity and on traits that improve the soil. Modern wheat varieties, for example, have half the micronutrients of older strains, and it’s pretty much the same for fruit and vegetables. The focus has been on breeding high-yield crops which can survive on degraded soil, so it’s hardly surprising that 60% of the world’s population is deficient in nutrients like iron. If it’s not in the soil, it’s not in our food.