By Tanja Folnović | Agronomy, Blog Comments are Closed | 6 October, 2015 | 0
Climate change and agriculture are interrelated processes, both of which take place on a global scale. Climate change affects farming in a number of ways, including through changes in average temperatures, rainfall, and climate extremes (e.g. heat waves), changes in pests and diseases, changes in atmospheric carbon dioxide and ground-level ozone concentrations, changes in the nutritional quality of some foods and changes in sea level.Climate change is already affecting agriculture, with effects unevenly distributed across the world. Future climate change will likely negatively affect crop production in low latitude countries, while effects in northern latitudes may be positive or negative. Climate change will probably increase the risk of food insecurity for some vulnerable groups, such as the poor. For example, South America may lose 1–21% of its arable land area, Africa 1–18%, Europe 11–17%, and India 20–40%. 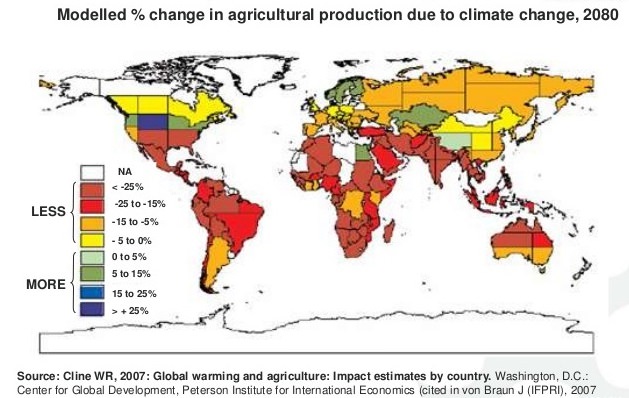 The accelerating pace of climate change, combined with global population and income growth, threatens food security everywhere. Agriculture is extremely vulnerable to climate change. Higher temperatures eventually reduce yields of desirable crops while encouraging weed and pest proliferation. Pests management become less effective, meaning that higher rates of pesticides will be necessary to achieve the same levels of control. Heat waves can cause extreme heat stress in crops, which can limit yields if they occur during certain times of the plants’ life-cycle (pollination, pod or fruit set). Also, heat waves can result in wilted plants (due to elevated transpiration rates) which can cause yield loss if not counteracted by irrigation. Heavy rains that often result in flooding can also be detrimental to crops and to soil structure. Most plants cannot survive in prolonged waterlogged conditions because the roots need to breathe. The overall impacts of climate change on farming are expected to be negative, threatening global food security.

A number of countries in Africa already face semi-arid conditions that make agriculture challenging, and climate change will be likely to reduce the length of growing season as well as force large regions of marginal agriculture out of production. Projected reductions in yield in some countries could be as much as 50% by 2020, and crop net revenues could fall by as much as 90% by 2100, with small-scale farmers being the most affected.

Farming in a warmer world

Changes in climate may also impact the water availability and water needs for farming. If temperature increases and more sporadic rainfall events result from global warming, it is possible that irrigation needs could increase in the future. In anticipation of these changes, plant breeders are currently working to develop new varieties of crops that are considered to be drought tolerant, and more adaptable to varying levels of temperature and moisture.

Effects of global warning on agriculture

Agriculture contributes to climate change by anthropogenic emissions of greenhouse gases (GHGs), and by the conversion of non-farm land (e.g., forests) into farm land. Agriculture, forestry and land-use change contributed around 20 to 25% to global annual emissions in 2010.

Food production in vulnerable areas can remain viable, but investments in the appropriate agriculture innovations are needed now, because some of the most effective ways to deal with climate change, like more resilient crop varieties and livestock breeds, can take up to 20 years to develop. Our efforts to mitigate the effects of climate change, urgent as they are, will have little effect over the next 50 years. Changes during this period have already been set in motion by past greenhouse gas emissions.

Limiting greenhouse gas emissions will only affect climate change in the long-term (beyond 50 years). So we must learn to adapt to the changes in climate that will occur over the next 50 years. 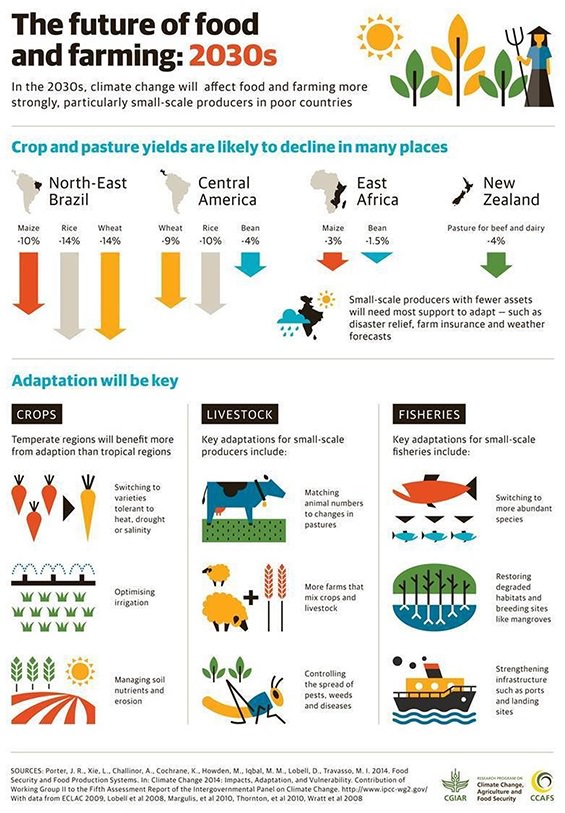 The future of food and farming infographic- 2030s