By Tanja Folnović | Agronomy, Blog Comments are Closed | 24 March, 2016 | 0
Nematodes are pests that harm the plants, but there are also nematodes that protect plants from other insect pests and play beneficial roles in the soil environment. Based on their feeding habits, nematodes can be classified into functional groups- bacterial-feeders, fungal-feeders, and plant parasites. Nematodes are microscopic, worm-like organisms that live in water films and water-filled pore spaces in the soil. Typically, they are most abundant in the upper soil layers where organic matter, plant roots, and other resources are most abundant. Nematode abundance in soils—managed and unmanaged—ranges from 1–10 million individuals/m2.

Nematodes contribute to a variety of functions within the soil. In farm systems, nematodes can enhance nutrient mineralization and act as biological control agents, and maintain adequate levels of plant-available nitrogen relying on organic sources of fertility. Nematodes also contribute directly to nutrient mineralization through their feeding interactions. Indirectly, nematodes enhance decomposition and nutrient cycling by grazing and rejuvenating old, inactive bacterial and fungal colonies, and by spreading bacteria and fungi to newly available organic residues. In the absence of grazers, such as nematodes and protozoa, nutrients can remain immobilized and unavailable for plant uptake in bacterial and fungal biomass.

Inside the nematode is a symbiotic bacteria that when released inside an insect kills it within 24 to 48 hours. The nematodes penetrate the insect body and release their bacterial associates into the insect’s body cavity. These bacteria multiply and overwhelm the immune response of the host insect, ultimately killing the host. It also converts host tissue into nutritive products, which can easily be taken up by nematodes. Inside the dead insect, the nematodes feed and multiply. As the food resources within the dead pest become scarce, the nematodes will exit the dead insect and immediately start searching for a new host.

In the soil are present different feeding groups of nematodes, which community vary between farm systems and seasons, and they are influenced by a variety of factors, including crop and soil management practices and the presence and abundance of natural enemies. Management practices like tillage, crop rotation, and the use of organic materials influence the physical and biological characteristics of the soil that influence the abundance of nematodes. Although nematodes are already present in the soil, farmers often need to add them additionally (in the form of dust) to be the insufficient quantity to treat insect pests. 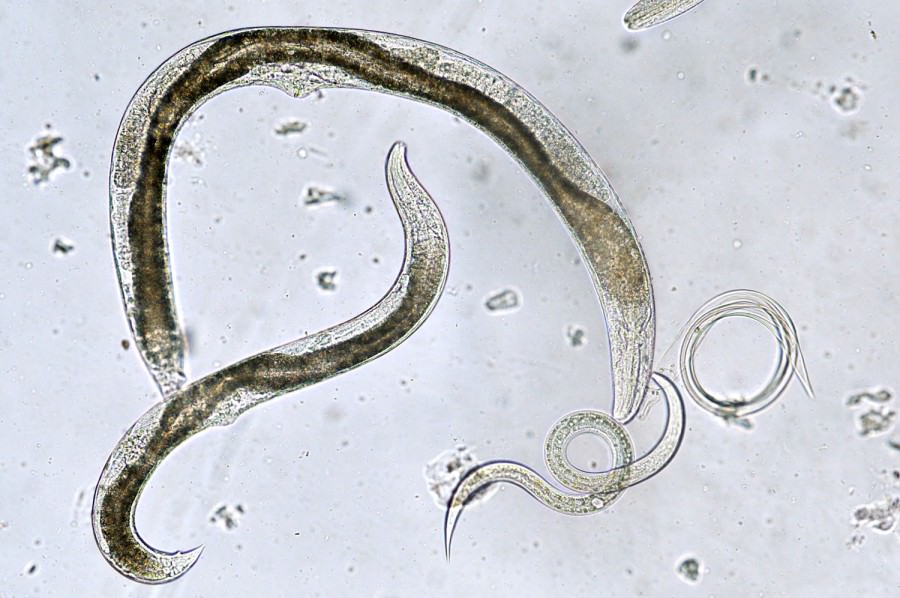 Soil nematodes under the microscope

How to Apply Nematodes?

The solution can be applied using a watering can, hose-end sprayer, backpack, or pump sprayer or through irrigation or misting systems, avoiding applying on the sun, as the nematodes are photophobic and do not like direct light. At the time of application, the soil should be moist and lightly watered immediately after application.