Forests are one of the Earth’s greatest natural resources, a key to support life on Earth. There is a reason why we often figuratively speak of ‘the tree of life.

Eight thousand years ago, half of the Earth’s land surface was covered by forests or wooded areas. Today, these areas represent less than one-third. Forests are home to 80% of the world’s land-based biodiversity and billions of dollars worth of medicinal plants are harvested from tropical forests every year. In addition, 1.6 billion people depend on them to some extent for their livelihoods.

Forests help regulate local weather systems, controlling how much rain and snowfall in a given area. This is especially important in agricultural areas where the growing season is short. Many plants need the help of wild pollinators to produce fruit and seeds. Birds, bees, insects, and animals act as pollinating agents in the agricultural process, and many make their homes in forest environments next to farmlands. Ironically, when we destroy a forest habitat for agricultural reasons, we eliminate one of the components necessary to yield successful crops. 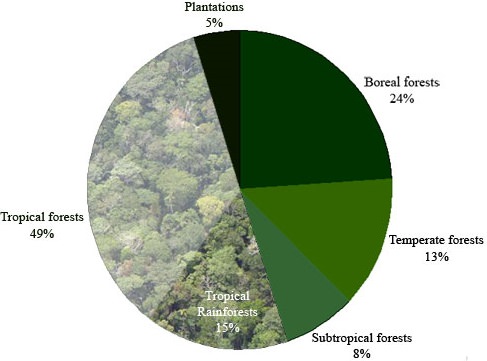 Forests provide a habitat for natural pest controllers. An estimated 99% of pests that have the ability to destroy crops are kept in check by birds, spiders, parasitic wasps, ladybugs, and fungi. These organisms save farmers billions of dollars every year and reduce the need for chemical pesticides.

Forest degradation and deforestation can cause loss of biodiversity and the destruction of natural ecosystems which isn’t just bad for nature: damage to forests can have severe consequences for the people who depend on them, too.

Forests not only help us grow the food we need but also provide us with the energy we need to cook. An estimated 2.4 billion people use wood fuel for cooking their food and approximately 765 million people worldwide use wood fuel to boil and sterilize water.

Forests cover varies across different areas in the world. Some countries are managing to restore their forests while others continue to lose them.  In developed countries, forest area has remained stable or even increased over the past 100 years. This is largely due to the fact that many developed countries deforested large areas of their land centuries ago to use the land for agriculture and other activities. Today, however, in developing countries, the amount of forested areas continues to diminish.

Ten countries with the largest area of primary forest, 2010

About 13 million hectares of forest have been destroyed every year since 2000 (the equivalent of five football pitches disappears every minute). Although deforestation is shown to be slowing down. Forests have to be managed sustainably so that we can continue to benefit from this precious natural resource.

There are many factors that contribute to forest loss and degradation. From natural hazards such as drought, avalanches, fire, and flooding – to human-induced pollution, climate change and introducing invasive species, forests certainly have a lot to deal with. It may seem like it is all a bit overwhelming and that our planet’s forests are doomed. But that’s not the case! It’s in our hands to change human practices to better conserve the Earth’s forests.