Intensive Farming vs. Humus in Soil

You have probably heard that hummus is an important part of your soil, but few people know what it is and why it is important.

The best way to understand humus is to understand how it is formed. Dead plant and animal material consist of organic matter (a wide range of molecules including starches, proteins, sugars, carbohydrates, amino acids). When organic matter starts to decompose, these molecules are broken down into smaller molecules by the micro-organisms in the soil (mostly bacteria and fungi). This is a complex process called humification. 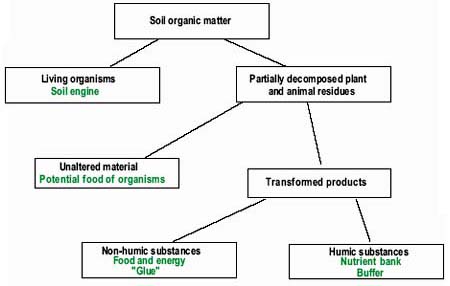 At some point, all of the good stuff in the organic matter is used up and some molecules remain that can’t be used by micro-organisms or plants. This remaining material is called humus. It consists mostly of carbon and so it is still organic, but micro-organisms just can decompose it any further. Humus is so stable that it can persist in the soil for hundreds of years. Humification affects the development of the soil by determining its color. Soils with a dark brown to black color are usually high in humus content. The dark color of humus helps to warm up cold soils in the spring. 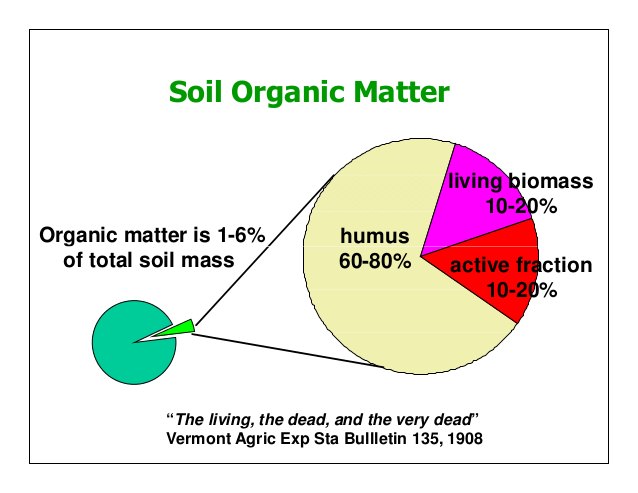 Humus is like a big sponge that can hold up to 90% of it’s weight in water. This water holding capacity of humus is why humus rich soil will remain moist for weeks longer than soil without humus. Humus has a negative charge which means that many of the nutrients plants require stick to humus, including ammonium (source of nitrogen), calcium, magnesium, phosphorous and other positive charged elements. The humus sponge holds onto these nutrients and prevents rain from washing them away. When a plant root comes in contact with it, the plant root is able to remove the nutrients from the humus sponge. The process is a bit more complicated than this, but you can think of humus as being a slow release source of fertilizer for your plants.

Perhaps the most important reason for having humus is that it’s responsible for aggregation. Aggregation is what makes the soil loose and very friable, improving the structure of soil. Better soil structure found in humus rich soil makes it easier for plant roots to grow by providing them with better access to nutrients, water and most importantly oxygen.

Importance of humus for the soil

Humus is not just soil, it is a community of living things. Organic matter is a farming ground for many types of microbes and other microorganisms that help plants roots absorb necessary nutrients. The aim of every farmer is to increase the organic matter content in the soil. This is done through compost, green manure crops, crop rotation, perennial forage crops, zero or reduced tillage and agroforestry farming.

Trying to meet the food needs of a growing population, more and more farmers are switching to intensive farming. This way of farming adversely affects the humus, thus enhancing the processes of humus mineralization. Therefore is necessary to continuously add organic matter (organic fertilizer) into the soil and with appropriate crop rotation and regulation of soil reaction maintain optimal humus content. These organic fertilizers can be cattle, chicken, horse or some other manure.

Source: Garden Myths: What is humus?