By Tanja Folnović | Agronomy, Blog Comments are Closed | 1 October, 2015 | 0
Coffee is a brewed drink prepared from roasted coffee beans, which are the seeds of berries from the Coffea plant. Coffee plants are cultivated in over 70 countries, primarily in the equatorial regions of the Americas, Southeast Asia, India and Africa. 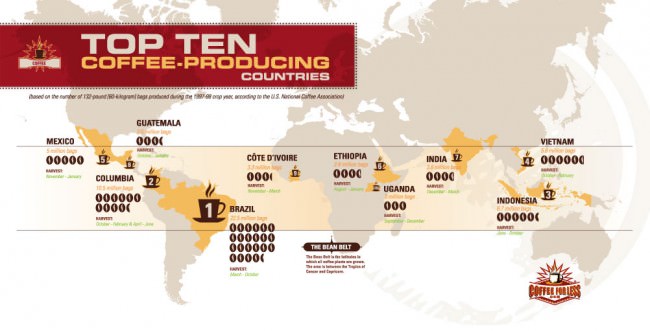 The two most commonly grown are the highly regarded arabica, and the less sophisticated but stronger and more hardy robusta.

Arabica coffee grows at 800/15000 meters above sea level. It has a long green-blue bean, with a typical ‘S-shaped’ furrow. In the cup, it proves aromatic, sweet, delicate and sometimes fruity. It is characterized by a low level of caffeine ranging anywhere from 0.8% to 1.5%.

Robusta variety is cultivated at low altitudes from 200 to 600 meters above sea-level. Its yellow-brown bean has a rounded shape and a straight grove. In the cup, it is known for its more distinct flavor and for having greater body and a level of caffeine ranging from 1.7% to 3.5%. 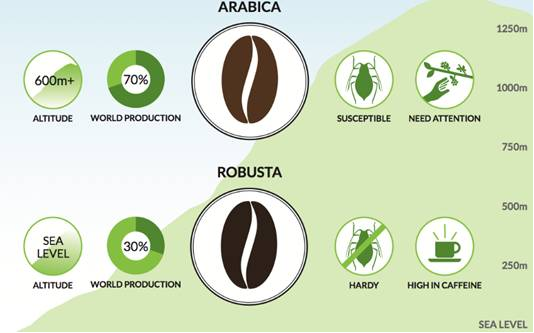 Differences between coffee arabica and robusta

With regards to the Arabica variety, its most important cultivation areas today are Brazil (the world’s top producer), other South American countries including Columbia, Central America and several countries in Eastern Africa. Instead, the Robusta varieties are primarily cultivated in India (whose cherry and parchment are considered the best in the world) and other regions of South-East Asia (Vietnam, Indonesia) and Central Africa. 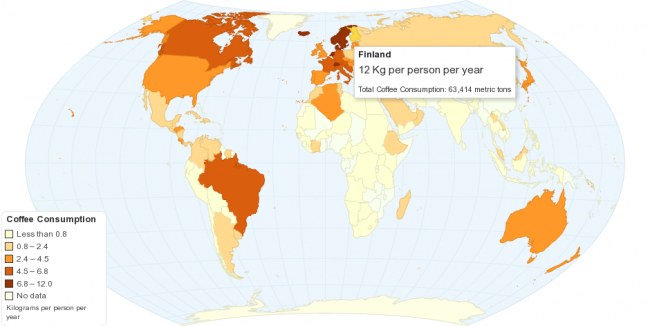 According to legend, ancestors of today’s Oromo people were believed to have been the first to recognize the energizing effect of the coffee plant, though no direct evidence has been found indicating where in Africa coffee grew or who among the native populations might have used it as a stimulant or even known about it, earlier than the 17th century. The story of Kaldi, the 9th-century Ethiopian goatherd who discovered coffee when he noticed how excited his goats became after eating the beans from a coffee plant, did not appear in writing until 1671 and is probably apocryphal. The original domesticated coffee plant is said to have been from Harar in Ethiopia.

Coffee was initially used for spiritual reasons. As these ceremonies conflicted with the beliefs of the Christian church, the Ethiopian Church banned the secular consumption of coffee until the reign of Emperor Menelik II. The beverage was also banned in Ottoman Turkey during the 17th century for political reasons, and was associated with rebellious political activities in Europe.

Coffee is slightly acidic (pH 5.0–5.1) and can have a stimulating effect on humans because of its caffeine content. Coffee is one of the most popular drinks in the world. It can be prepared and presented in a variety of ways (e.g. espresso, cappucino, cafe latte, etc.). The effect of coffee on human health has been a subject of many studies; however, results have varied in terms of coffee’s relative benefit. The majority of recent research suggests that moderate coffee consumption is benign or mildly beneficial in healthy adults.

Due to its good properties and impact on humans, coffee has its own day. This day is used to promote fair trade coffee and raise awareness for the plight of the coffee growers. The history of this day was first celebrated in Japan in 1983 and many countries have their own inaugural days of celebration as well. However, it’s celebrated on September 12, September 29 and October 1, depending on country.

Once ripe, coffee beans are picked, processed, and dried. Green (unroasted) coffee beans are one of the most traded agricultural commodities in the world. The beans are roasted to varying degrees, depending on the desired flavor, before being ground and brewed to create coffee.

Green (unroasted) coffee is one of the most traded agricultural commodities in the world- it’s the top agricultural export and the second most valuable commodity exported by developing countries. 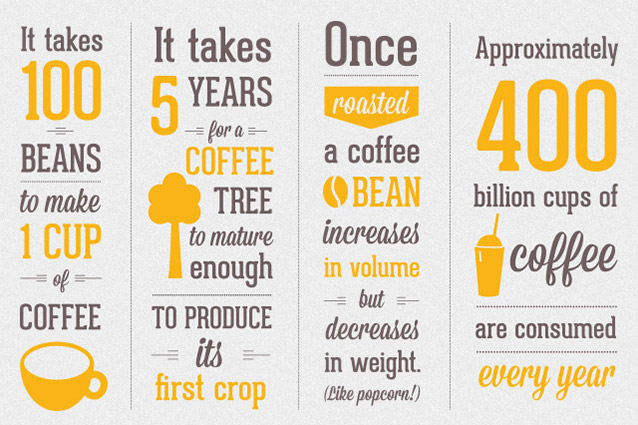 If you are a farmer, you can track your coffee production in AGRIVI farm system. It helps you manage your whole production and allows you to track all farm activites, finaces, reports and also analyze productivity and profitability of your farm production.