International Day of Biological Diversity – 22 May

By Tanja Folnović | Agronomy, Blog Comments are Closed | 19 May, 2016 | 0
Biodiversity is referred to biological diversity, the variety of life on Earth. It is the variety within and between all species of plants, animals and microorganisms and the ecosystems within which they live and interact. Biodiversity plays an important role in the way ecosystems function and in the many services they provide, including nutrients and water cycling, soil formation and retention, resistance against invasive species, pollination of plants, regulation of climate, as well as pest and pollution control by ecosystems.Humans, however, have a strong influence in biodiversity reduction and loss of genetic diversity. Overfishing and hunting, the destruction of habitats through agriculture and urban sprawl, the use of pesticides and herbicides, and the release of other toxic compounds into the environment have all taken their toll. Due to negative impact of human on the biodiversity, the United Nations has proclaimed May 22 the International Day for Biological Diversity to increase understanding and awareness of biodiversity issues. 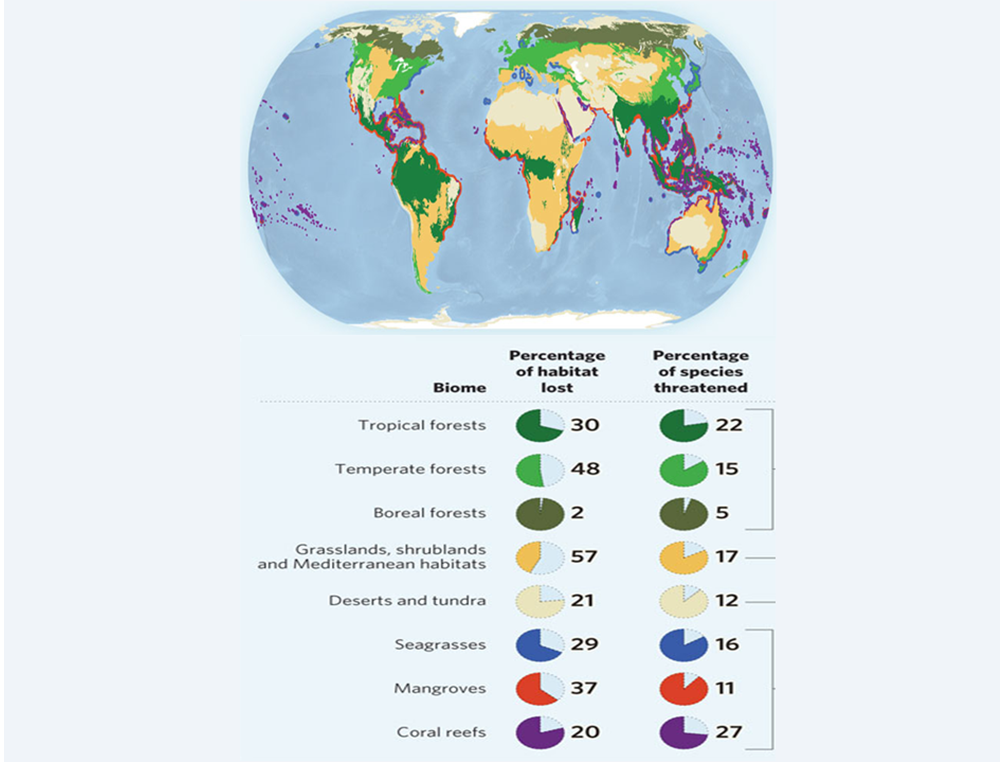 Number of threatened species and habitat loss in the world

From its creation in 1993 until 2000, it was held on December 29, but in 2000, the date was shifted to commemorate the adoption of the Convention on May 22, 1992, at the Rio Earth Summit. International Day for Biological Diversity is not a public holiday, it’s an observance which every year has a different theme. Celebrations are organized by the Secretariat of the Convention on Biological Diversity and a range of non-governmental organizations. This year theme is Mainstreaming biodiversity; sustaining people and their livelihoods. Due to a defined theme, activities include distributing information on biodiversity, exhibitions and seminars, movies about environmental issues, presentation of programs and planting trees or some other plants to prevent erosion.

Among the transformation of the natural areas due to an introduction of the exotic species and genetically modified organisms which lead to different forms of imbalance in the ecological equilibrium, there is also a pollution issue. Human activities influence the natural environment producing negative effects that alter the flow of energy, the chemical and physical constitution of the environment and abundance of the species. Don’t worry, there are also several important ways in which humans can slow biodiversity loss.

Everyone is invited to participate in activities of International Day for Biological Diversity, and also to keep in mind ways how to contribute environmental preservation and preventing further biodiversity losses.