Long-standing Fight of Farmers and Weeds Resistant to Herbicides

Fighting against weeds represents one of the most important challenges for farmers from all around the world. In addition to the fact that weeds complicate farm production and make it more expensive, they significantly also affect the yield reduction and quality of crops. Weed management practices often rely on chemical treatments with herbicides as the most efficient method. The particular problem that occurs with herbicide treatment is herbicide resistance.

The first cases of resistance appeared shortly after the first herbicide application. At the end of the 1960s, there was a case where the Groundsel (Senecio vulgaris) had developed resistance to triazine herbicides. Shortly after that, there was determined resistance of Foxtail (Echinochloa crus galli) and Pigweed (Amaranthus retroflexus) to ALS inhibitors (inhibitors of the acetolactate synthetase enzyme), and the resistance of Pigweed, Velvetleaf (Abutilon theophrasti), Maple leaved goosefoot (Chenopodium hybridum) and Green foxtail (Setaria viridis) to herbicide inhibitors of the photosynthesis process. It has since been revealed that there are 250 resistant biotypes of weeds in the world, which have developed resistance to 160 herbicides. In the following graph, you can see how weed resistance increases due to the increase of pesticide use. 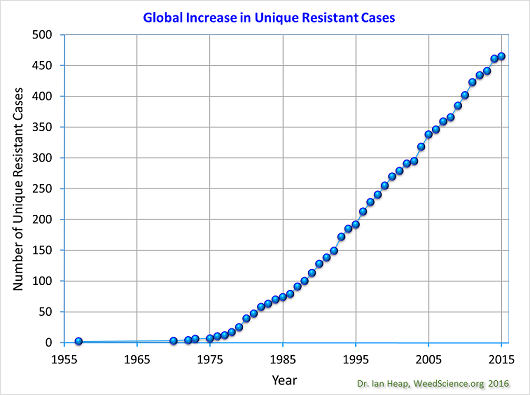 Weed resistance increases due to increase of pesticides use

What Is Weed Resistance to Herbicides?

Resistance is the ability of weed species to survive treatment that would otherwise effectively suppress them. In other words, resistance is a phenomenon when the active ingredient of the herbicide no longer has the desired effect on a certain weed species. The term resistance is often equated with the concept of tolerance, but there is a difference. Weed resistance can occur naturally or it can be induced by certain techniques such as genetic engineering and tissue culture selection, whereas weed tolerance only occurs naturally. It is interestingthat resistant biotypes can not only survive commercial (recommended) amounts of herbicides but also extremely high amounts. Weeds may also develop resistance to two or more herbicides with the same action mechanism as well as to multiple herbicides with different action mechanisms.

After the application of herbicide, a weed plant can survive its toxic effect due to certain environmental conditions (precipitation, soil) or possession of mechanisms which prevent the phytotoxic herbicide effect. Weeds that survive herbicide application with their natural mechanism, create seeds that will germinate the following season. Newly emerged weeds will also be resistant to that herbicide. If the farmer continues to apply the same herbicide on weeds, the number of resistant individuals in the population will be higher every year. In the picture below, you can see an increase in the number of resistant individuals (colored in red), due to the continuous use of herbicide with the same action mechanism. 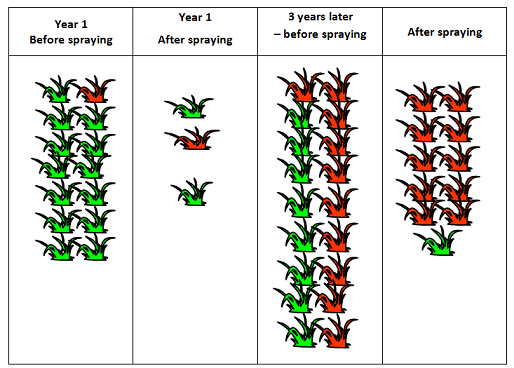 The occurrence of weed resistance on herbicide(s)

Herbicide resistance has developed as a result of repeated applications of herbicides over a longer period of time and with little or no rotation of herbicides with the same action mechanism. Weed are mostly resistant to triazines, phenylurea, aryloxyphenoxypropionates (APP), cyclohexadione (CHD), sulfonylurea and imidazolinone, which are the most prevalent active ingredients in herbicides.

Multi-year application of herbicides with the same mechanism of action on the same field may lead to resistance of certain weed species, and complicate their future control. Successful management of the weed resistance includes certain measures that farmers should implement (physical, biological and chemical) including:

How Can AGRIVI Software Help?

Uncontrolled use of herbicides has led to widespread development of weed resistance, which represents the problem with the most important weeds.

Good farm practices, as well as a combination of chemical, physical and biological measures, can reduce the occurrence of weed resistance on herbicides. Good farm practices also include monitoring of all farm activities in the field which you can track with AGRIVI farm management software. The software helps you keep records of all farm activities during a vegetation season, for any crop, such as herbicide treatments of crops with related work hours of workers and machinery and their cost. All entered data can be automatically analyzed in powerful AGRIVI analytics, thus allowing a farmer to see all usages, costs and overall farm productivity and profitability from one single place.

Use AGRIVI software and reduce the risk of herbicide resistance in weeds.