Phytoplasmas are known causal agents of hundreds of diseases in various plants. They are microscopic plant pathogens, which live in the vascular system of plants and are spread by sap-feeding insects, including leafhoppers and planthoppers. There are several diseases of grapevine caused by phytoplasmas:

All grapevine yellows diseases have similar symptoms, including growth reduction, leaf discolouration, downward rolling of leaves and reduced quality and quantity of fruits. Symptoms are not uniform and may appear on some or all shoots of infected vines. Leaf symptoms in white cultivars appear as small, yellow spots along the main veins. These spots enlarge to form yellow bands along the veins, which gradually extend over large parts of the leaf. Red cultivars develop a similar pattern on the leaves, but the discolorations are reddish. Infected shoots often fail to lignify and appear thin and rubbery. They later become brittle, sometimes with bud necrosis. Affected branches blacken and die during the winter. Numerous small black pustules form along the diseased branches of susceptible cultivars. 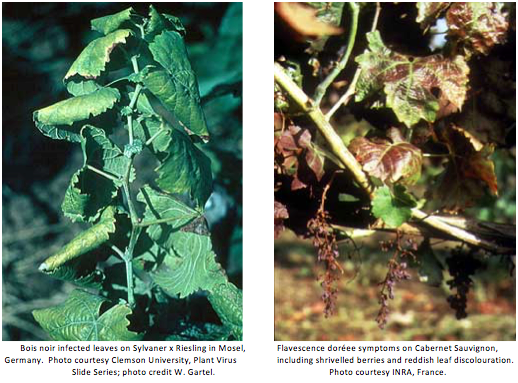 If grapevine is infected early in the season, fruit set is reduced, as the inflorescences dry out and fall off. In later infections, bunches become brown and shriveled. In some cultivars occurs premature berry drop.

Flavescence dorée is spread by the leafhopper Scaphoideus titanus, which spends its whole life cycle on grapevines. Both nymphs and adults are able to acquire the phytoplasma while feeding. After a latent period they are able to transmit the disease until they die. This leafhopper overwinters as eggs which are inserted (laid) into the bark of grapevines.

Bois noir is transmitted by a few planthopper vectors, the main one being Hyalesthes obsoletus. It prefers herbaceous weeds (Convulvulus arvensis, Urtica dioica, Calystegia sepium) over grapevines and transmits the phytoplasma from these weeds to grapevines. Since the vector only feeds incidentally on grape, bois noir is a much slower spreading disease than flavescence dorée. It is widespread in many parts of Europe.

Control of phytoplasma diseases involves scouting and removal of infected or symptomatic vines, as well as control of the vector with insecticide sprays. The first treatment occurs one month after beginning of hatching, to prevent feeding inoculation by individuals which would have acquired along with their very first meal after hatching. One or two additional monthly treatment may be recommended. When an infected grapevine is found, a quarantine area is delimited around it for a minimum of 2 years. All infected plants must be destroyed. Indeed, some cultural management as pruning of infected canes (which would act as important phytoplasma reservoirs for the vector) may help, providing that an efficient control of S. titanus is insured.

At this time, after harvesting of grapes, there are many cases of phytoplasma infection. The only way to stop spreading of this disease on other plants is to destroy all plants that are showing symptoms. To aviod this scenario, preventive measures should be taken – treatment of vectors (leafhoppers and grashoppers) before and after flowering of grapevine.

Both phytoplasmas and leafhoppers can be spread with propagation material. Flavescence dorée is symptomless in some cultivars and it also has a long (up to 3 year) latent period before symptoms can be seen. Thus even apparently healthy vines may be carrying grapevine yellows diseases. So, use only planting material from reliable, approved sources and produced in areas where phytoplasma diseases are not present.

Recommended materials for chemical treatment of vectors you can find in AGRIVI farm system. Manage pests properly and on time and save your vineyard.