By Tanja Folnović | Agronomy, Blog Comments are Closed | 15 July, 2016 | 0
The world currently produces more food per person than ever before. However, there are still over 800 million people who are suffering from severe malnutrition worldwide. For example, in rich countries total per capita food production for human consumption is about 900 kg a year. Due to unequal food distribution and large quantities of food lost during production and wasted in more developed countries, it feels like there is not enough food to feed the entire world.Food waste represents a one third (amounting to over one trillion dollars) of all food produced globally and thus it has a negative impact on the environment, economy, food security and nutrition. Food waste is a more serious problem in industrialized countries. It is usually caused by both retailers and consumers throwing perfectly edible foodstuffs into the trash. Per capita waste by consumers is between 95-115 kg a year in Europe and North America, while consumers in sub-Saharan Africa and South and Southeast Asia throw away only 6-11 kg a year each. Just one quarter of all wasted food could feed all of the undernourished people around the world who suffer from hunger.The most food loss occurs through the food supply chain, from farm crop production to processing, transport, storage and distribution management while it arrives to the end user. In broad terms, food losses are influenced by crop production choices and patterns, internal infrastructure and capacity, marketing chains and channels for distribution, and consumer purchasing and food use practices. Food losses also represent the waste of resources used in farm production such as land, water, energy and inputs. 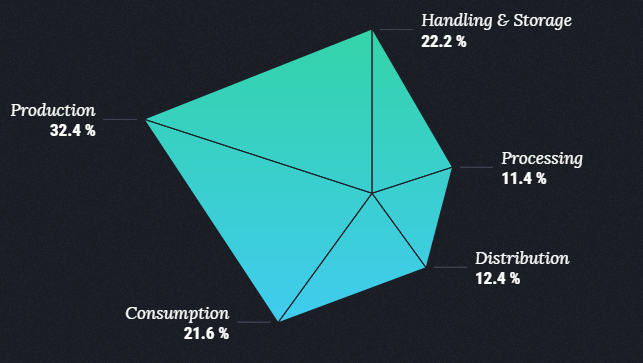 Stages of food waste in the world

The issue of food losses is of critical importance in the efforts to combat hunger, raise income and improve food security in the world’s poorest countries. Food losses have an impact on food security for poor people, on food quality and safety, economic development and the environment. The exact causes of food losses vary throughout the world and are dependent on the specific conditions and local situation in a given country. 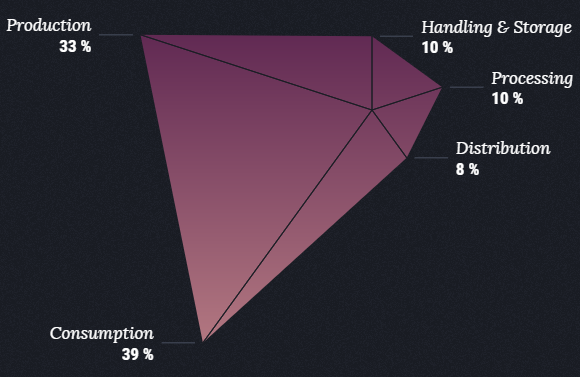 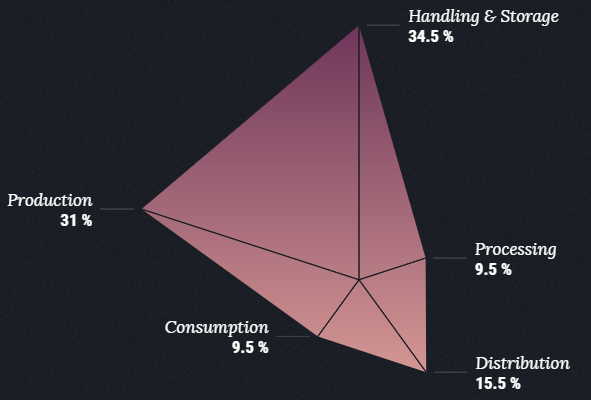 Sub-Saharan Africa and South and Southeast Asia have a high amount of food waste in the stages of storage and handling due to poor infrastructure for food preserving while rich countries in North America, Oceania and Europe have the most food waste in stages of consumption and production. Food waste in industrialized countries can be reduced by raising awareness among food industries, retailers and consumers. There is a need to find good and beneficial use for safe food that is currently thrown away. By learning how to reuse leftover food to feed humans and animals, and to produce energy and compost, food waste can become a valuable input to close nutrient cycles.

In order to improve food production to reduce food loss, AGRIVI farm management software gives farmers best farming practices in the form of tasks. For over 100 different crops, the system guides farmers on what to do during a specific season. They can also track all of their farm activities on fields, inputs of fertilizers, pesticides, fuel, work hours of workers and machinery. Using knowledge-intensive farm technologies, such as the AGRIVI system for the tracking of crop production, farmers can make the right decisions at the farm level. In the end, the system gives them an insight into profitability and productivity of their farm with powerful AGRIVI analytics and reports.

Farmers are the managers of the most productive lands on the Earth. Using best farming practices they can reduce food loss and thus improve the food chain.

Change the way food is produced – use AGRIVI.