By Tanja Folnović | Agronomy, Blog Comments are Closed | 1 March, 2016 | 0
Within a few years of planting fruit trees, most farmers find themselves with scraggly overgrown bushes and trees, rather than the Garden of Eden they had envisioned. The key to keeping fruit trees attractive and productive is annual pruning. Pruning is crucial for the management of plant’s life and health. It helps with the growth and development of younger plants thus creating a structure that will maximize vigor and productivity, minimize insect and disease problems, and help maintain strong canopy that will produce large and quality fruits, for many years.There are two types of pruning- winter and summer or pruning in the green. Summer pruning allows sunlight to ripen the fruit and ensures good cropping the following year. It manages growth only on trees with restricted forms such as cordons, espaliers, fans and pyramids. For all other fruit tree forms and bushes, winter pruning is crucial. The best time to prune your fruit trees is at the beginning of the vegetation, at bud break stage.

Farmers are often scared of pruning, they often think they will prune too much or too little, but pruning is not the brain surgery. Farmers just need to follow a simple three-step process that works for the vast majority of fruit trees, whether they grow pome fruits (apples, pears and quince), stone fruits (peaches, cherries, apricots, plums), bushes (blueberries, cranberries, raspberries, currant) or tropics.

When you begin to prune, the first step is to prune away dead, damaged or diseased wood, and also sprouts raised from the base of the trunk called ‘suckers’ and erect, perfectly vertical branches, called ‘water sprouts’.

Suckers and watersprouts are some common examples of fast new growth that take away energy from plants and trees. Ideally, any growth from below the graft union or growth coming from the roots/below the ground should be removed as soon as it appears. This same thing applies to fast-growing vertical shoots coming from the trunk/branches that may appear later in your tree’s life as it matures. Allowing suckers and water sprouts to remain on your fruit tree will only take away from the vegetative and fruiting wood you want to grow strong and healthy.

If you prune young tree plants, you need to remove all of the fruit buds in the first and/or second year, so that the bush puts its energy into growing. 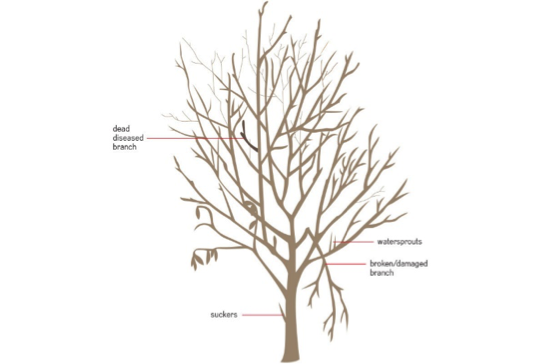 With all these clean-up cuts, it’s important to prune the branches back flush to the larger limb they’re growing from — don’t leave little stubs.

The goal of thinning is to allow light and air into the canopy, which boosts fruit production and reduces problems with pests and diseases. First remove any branches that grow downward, toward the center of the tree or that cross paths with another branch. The goal is to have evenly spaced branches splaying out in a pleasing, fractal-like pattern from the center.

If there are multiple branches compete with each other, thin out all but one, retaining the branch with the healthiest appearance and best crotch angle (roughly the 2 or 10 o’clock angle from the center of the tree). Wider angles can break when laden with fruit and narrower angles lead to bushy growth and fruit that is too high to pick. 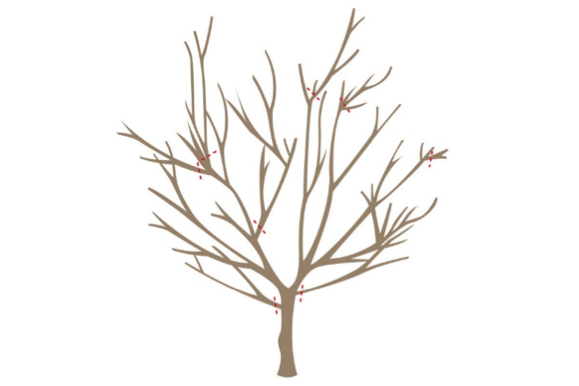 In the last step, you’re giving the tree a haircut. You need to prune back the outermost growth of the tree so the branches become shorter and thicker as they grow, rather than long and gangly. This keeps them from snapping under the weight of the fruit, which means cutting off 20-30 % of last year’s growth. 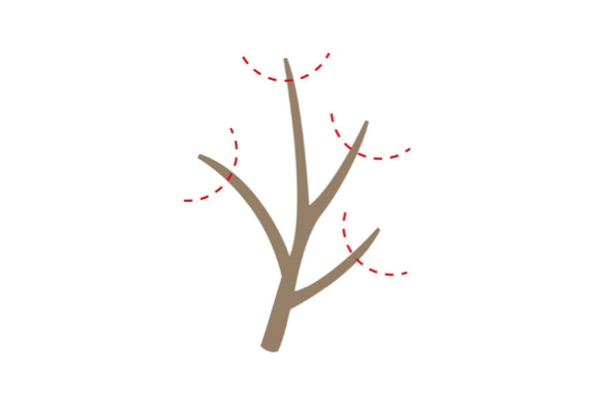 After pruning, remove all pruned wood from the orchard and destroy it or burn— especially if it contains any diseased material.

Pruning is an art, not a science, in which you don’t have to be perfect every time, but you need to keep records of all activities on your fields and farms. It’s important that the farmer knows exactly, in every moment, the total spent materials, work hours and cost for each activity, so pruning is not an exception. AGRIVI farm management software enables to farmers accurate tracking of pruned trees per all varieties and fields for each crop, number of work hours of all workers, work hours of used machinery, and related work costs.

Each activity in orchard or in the field requires farmer’s time and money. To have a profitable farm, farmers need to have an insight into each part of their production, e.g. how long pruning takes and on which field, how many workers are responsible for that activity, which worker does the most efficient job, how much is the total cost of that activity, and all other activities important for proper management of a farm production.

Accurate record-keeping of all farm activities allows farmers to see the productivity and profitability of their farm and help them in further decision making.

If you want to manage a productive orchard pruning is inevitable, as well as recording of that activity. So, track and record all your activities in one place – use AGRIVI system.