Sustainable Agriculture by 2030 – Impact on People

Extreme poverty could drop by two-thirds, mostly in South and East Asia, yet poverty in sub-Saharan Africa will still largely remain.

Absolute hunger levels are predicted to go down, both in real and percentage terms, but some groups, such as sub-Saharan Africans and rural women, will remain disproportionally behind. 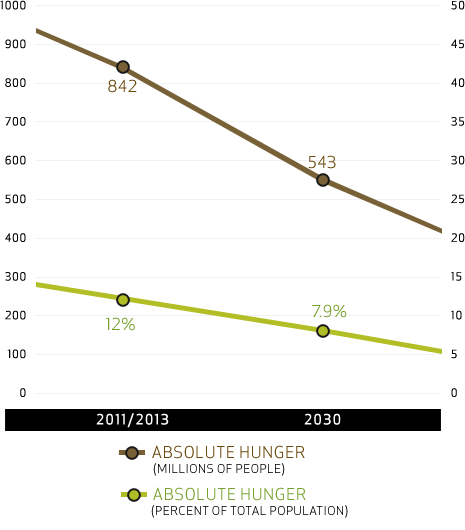 Almost half of the global population (3.9 billion) is expected to experience severe water scarcity, especially in the emerging BRIC countries. Water availability is central to agricultural development. Improvements in the efficiency of agricultural water use can benefit both irrigated and rainfed farmers by enabling new or formerly degraded lands to be farmed, and by increasing the cropping intensity on existing lands.

Average per capita food consumption in developing countries is expected to grow, with only one in seven people consuming less than 2500 calories per day.