One of the main goals of every organic farmer is to build long-term soil fertility and tilth by feeding the soil with a variety of natural amendments. The regular addition of compost is one of the best ways to enhance the soil’s organic and humic content, which helps to build a fertile soil structure. This soil structure makes better use of water and nutrients. It is easier to till and, overall, is better able to achieve optimum yields on a long-term basis.

Since compost has already decomposed, its impacts are much more long-lasting than crop residues and green or animal manures that rapidly degrade when added to the soil. Composting also gives farmers a way to recycle manures and plant residues that otherwise might present some environmental problems.

Compost is produced through the activity of aerobic (oxygen requiring) microorganisms. These microbes require oxygen, moisture, and food in order to grow and multiply. When these factors are maintained at optimal levels, the natural decomposition process is greatly accelerated. The microbes generate heat, water vapor, and carbon dioxide as they transform raw materials into a stable soil conditioner.

Compost has the unique ability to improve the properties of soils and growing media physically (structurally), chemically (nutritionally), and biologically. Other compost benefits include:

Although the most common way to produce compost is using microorganisms, compost can be also produced using worms. This is called worm compost or vermicompost. This kind of compost is a highly valued, and is often called black gold. This is because there are not many farmers involved in worm compost production and it takes time to produce.

Vermicompost is the product or process of composting using various worms, usually red wigglers, white worms, and other earthworms, to create a heterogeneous mixture of decomposing vegetable or food waste, bedding materials, and vermicast, which are also called worm castings, worm humus or worm manure. It is the end-product of the breakdown of organic matter by an earthworm. These castings have been shown to contain reduced levels of contaminants and a higher saturation of nutrients than do organic materials before vermicomposting.

Containing water-soluble nutrients, vermicompost is an excellent, nutrient-rich organic fertilizer and soil conditioner. While there are nutrients in worm castings, the real benefit to worm castings are the millions of beneficial microbes that they contain. Those microbes eat organic matter in the soil and release available plant nutrients. Fungi in the castings form symbiotic relationships to transport water and nutrients to the roots. They can also hold water in the soil and help with water management. Worm castings have at least 10 times more microbes than soil or regular compost. While vermicomposting is generally known as a nutrient rich source of organic compost used in farming and small scale sustainable, organic farming, the process of vermicasting is being studied as a treatment for organic waste in sewage and wastewater plants around the world.

Worms eat food scraps, which become compost as they pass through the worm’s body. Compost exits the worm through its tail end. This compost can then be used to grow plants. Vermicompost is good for plants because the worms are eating nutrient-rich fruit and vegetable scraps and turning them into nutrient-rich compost. 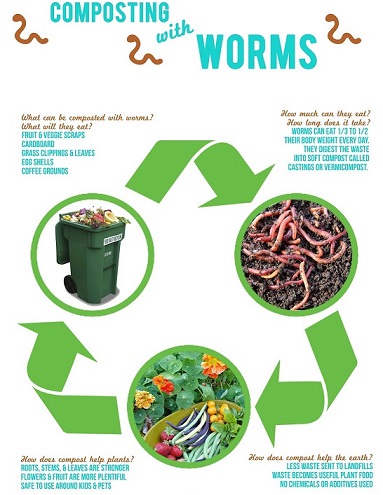 The Idea of Using Worms to Produce a Compost

For millions of years, worms have been hard at work breaking down organic materials and returning nutrients to the soil. Worms could eat any organic material. However, for the compost the best sources are raw fruit and vegetable scraps. Orange rinds and other citrus fruits, which are too acidic, and can attract fruit flies, should be avoided as well as cooked food and meat.

In addition to compost, the worms produce worm juice. This juice is also loaded with beneficial microorganisms which can be watered down and added to any kind of crops, even flowers. Some farmers are using the juice in modified hydroponic systems and calling it vermiponics.

Earthworms leave soil 5-11% richer in the essential plant nutrients of nitrogen, phosphorus and potassium than when they first ingest it. As an organic fertilizer, vermicompost is a substitute for synthetic fertilizer in soil-enriched vegetable production. As a soil conditioner, vermicompost is superior to traditional compost due to its ability to improve the soil structure and to increase its water-holding capacity.