Farmers constantly battle with the weeds, but weeds can have a useful purpose – they can be used as a soil indicators. Simply by observing the most prevalent weeds that are growing in a specific area, they can indicate if the soil is acidic or alkaline, whether the soil is a healthy, balanced or if it’s depleted.  Weeds can indicate a poorly draining soil, or a soil that is unable to retain moisture.  Weeds can even indicate if the soil is unbalanced, being overly rich in one nutrient and deficient in others.

When using weeds as a soil indicator, observe several of the most prevalent types of weeds to get an accurate soil assessment. If on cultivated field suddenly appears certain weed species, i.e. if this type is dominating, it indicates mistakes in cultivation technology management and soil condition. For example, field horsetail, field mint and creeping buttercup indicate severe soil compaction and excess moisture, while nettles and chickweed indicate that the soil is rich in humus.

The use of weeds as soil indicators is not a new concept. In 50 AD, the great Roman scholar, Pliny the Elder observed that land supporting wild plum, elder, oak, and thimbleberry was also favourable for wheat production. Many North American immigrants chose land for their farms according to the vegetation it supported. They quickly recognized that white pine communities were characteristic of sandy soils of little agricultural value, whereas forests of birch, beech, maple, or hemlock indicated more fertile soils.

This can be especially valuable when bringing new land into cultivation as it helps inform the techniques to employ and the soil conditioners to incorporate. However, to get an accurate assessment of soil condition, it should determine which weed type is dominant or observe a few common species. For example, the dandelion and common mullein both indicate an acidic soil, but common mullein can also mean a low fertility soil, so if you see it alone, it could mean several things, but seeing it along with dandelions would indicate an acidic soil. For an existing plot, the changes in preponderance of certain weeds over time can provide a subtle, but useful gauge to the health or otherwise of the soil.

There will always be a battle between man and weed, but knowing that weeds can be used not only as a soil indicator, but also the flower of many weeds provide essential nectar and pollen, the foods needed by beneficial insects to complete their life cycle.

In the table below you can see a list of weeds that show a particular soil condition and its nutritional status. 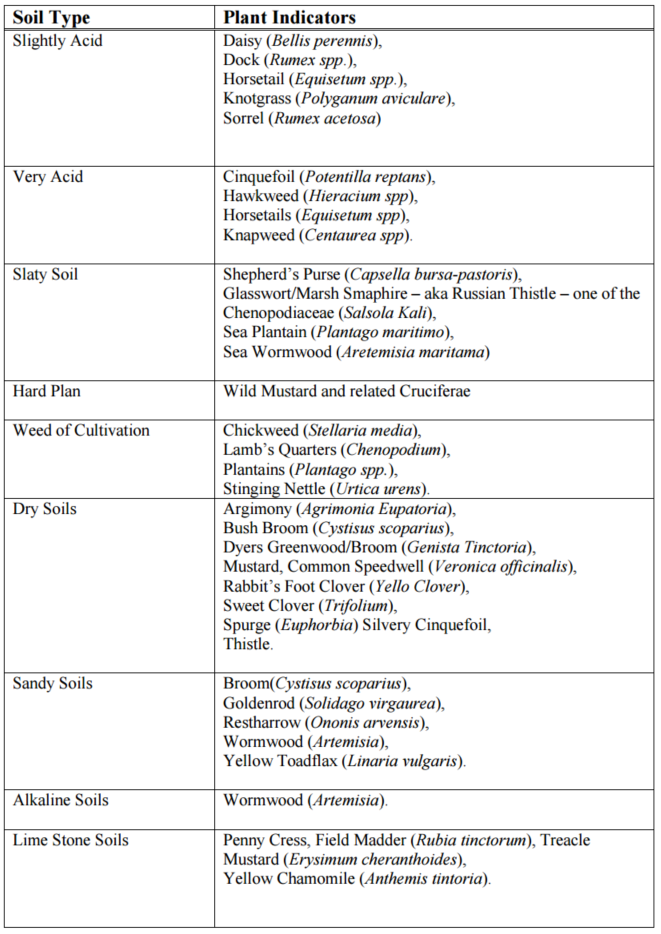