Industrial hemp (Cannabis Sativa L.) is an annual broadleaf plant with a taproot and is capable of very rapid growth under ideal growing conditions. Hemp is one of the easiest plants to cultivate, requiring little or no fertilizers, pesticides or herbicides. More than 50 different viruses, bacteria, fungi and insect pests are known to affect the hemp crop. However, its rapid growth rate and vigorous nature allow it to overcome the attack of most diseases and pests.

The hemp plant is related to marijuana, but it doesn’t contain the psychoactive ingredient that generates as high, it contains less than 0.3% Tetrahydrocannabinol (THC).

Because of long, tough bast stem fibers, industrial hemp is used in products ranging from textiles to cosmetics. Hemp fibre is the longest, strongest and most durable of all natural fibers. They can produce textiles that can be used to make non-allergenic clothing. Hemp can even produce lightweight, non-toxic easy-to-use building materials.

Hemp and humanity have been linked for over 10,000 years. Hemp was one of the first agricultural crops, and remained the planet’s largest crop and most important industry until late last century, when its cultivation was banned. Although, technically, hemp is not illegal to grow, it requires obtaining a special permit from the DEA (Drug Enforcement Administration). These permits are rarely given out and require that the crop be surrounded by security measures such as fences, razor wire, security guards, or dogs.

While hemp faces significant legal obstacles due to its close relationship to the marijuana plant, most of the non-Western world never stopped growing hemp, and today hemp for commercial use is grown mostly by China, Hungary, England, Canada, Australia, France, Italy, Spain, Holland, Germany, Poland, Romania, Russia, Ukraine, India and throughout Asia. Other countries are working toward reviving the hemp industry. Allowing full-spectrum hemp farming would be a boon for mankind and mother Earth.

The benefits of having a plant that can grow in almost any soil, with very minimal maintenance, and that can be used for virtually everything, might not be still on the forefront of most farmer’s minds. Hemp cultivation is a cash crop enterprise that can be used by farmers to rotate with their other crops to enrich the soil, and harvest in around six months. 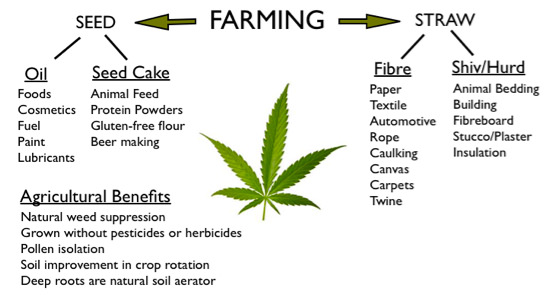 Use of hemp and its benefits

Beyond the growing awareness and use of marijuana’s medical miracles, hemp plants offer a wide range of solutions to the planet’s pollutions. Those solutions include:

The history of hemp is rich, interesting and rather inspiring, dating back to first European colonies in the 1600′s. Hemp enthusiasts like to note that it was also cultivated by the first president of the United States, George Washington, and that the Declaration of Independence was written on paper made of hemp fiber. Still, many people are unaware of the differences between hemp and cannabis, and know very little of its history or of its potential value. This is changing, however, as widespread support for the end of cannabis prohibition spreads and the outreach effort grows.