Soil formation is the result of a complex network of biological, chemical, and physical processes. The role of soil microbes is of high interest since they are responsible for most biological transformations and drive the development of stable and labile pools of carbon (C), nitrogen (N), and other nutrients, which facilitate the subsequent establishment of plant communities.

Soil microorganisms exist in large numbers in the soil as long as there is a carbon source for energy. There are more microbes in a teaspoon of soil than there are people on the earth. Soils contain about 8-15 tons of bacteria, fungi, protozoa, nematodes, earthworms, and arthropods.

The real deal is that without soil microbes, we would all die. The work they do in our soil is incredibly complex but it all boils down to this- microbes eat, thus we eat. Plants are unable to take from the soil the nutrition they need without microbes working in the soil. Microbes are alive and must-have nutrition to survive and that nutrition comes from organic matter. As they consume the nutrients they need, microbes create foods like nitrogen, carbon, oxygen, hydrogen, phosphorus, potassium, and trace minerals for our plants. It is the microbes that convert the NPK and minerals in the soil into a form our plants can use to grow and produce food and flowers for us.

What do bacteria do in the soil?

Soil bacteria are the primary digestive system of the soil. Their activity is responsible for almost 90% of all biological and chemical actions. For instance, key macronutrients such as nitrogen, sulfur, and phosphorus all require a microbial transformation in the root zone to make them more available to the plant.

Soil bacteria and other microbes also:

Soil micro-organisms are living, breathing organisms and, therefore, need to eat. Their nutrients are primarily derived from the organic matter they feed upon. The benefit is that they also give back or perform other functions that benefit higher plant life.

Azobacter, for example, is a genus of free-living bacteria that converts atmospheric nitrogen into ammonium, making it available for plant use. This process may only take place, however, if certain conditions are met. Azobacter is inhibited by a large range of toxic mineral and organic compounds but may tolerate relatively high salinity and their activities are enhanced in the presence of clays. 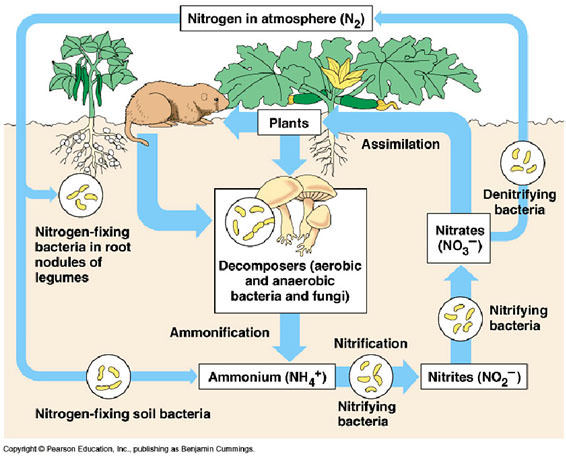 Microbes can enable plants to better tolerate extreme temperature fluctuations, saline soils, and other challenges of a changing climate. There is even evidence that microbes contribute to the finely-tuned flavors of top-quality produce, a phenomenon observed in strawberries in particular.

Producing more food with fewer resources may seem too good to be true, but the world’s farmers have trillions of potential partners that can help achieve that ambitious goal. Those partners are soil microbes.

They are not farmers, but they are working in the name of farmers everywhere, thus making the work of farmers a little lighter, increasing the productivity of every field, and reducing the costly inputs that stretch farmers’ profits as thin as a wire.