Millet – Forgotten Ancient Grain Responsible for Society as We Know It

By Tanja Folnović | Agronomy, Blog Comments are Closed | 29 December, 2015 | 0
Millets are a group of highly variable small-seeded grasses, widely grown around the world as cereal crops or grains for fodder and human food. Millets are important crops in the semiarid tropics of Asia and Africa (especially in India, Nigeria, and Niger), with 97% of millet production in developing countries. The crop is favored due to its productivity and short growing season under dry, high-temperature conditions. Four different millets are mostly commonly farmed worldwide, listed with the most widely produced:

Millet is a variety of grass that grows quickly and produces prodigious amounts of hard, small seeds that look a bit like quinoa. It’s not very common in the developed world, but in the developing world, millet is often a literal lifesaver, replacing other key cereals like corn, rice and wheat.

Though it’s native to most parts of the Old World, it was believed to have been domesticated in China, one of the first domesticated cereals, around 10,000 years ago. It was spread by traders throughout Eurasia, and that’s where, according to the archaeologists, things get interesting.

The researchers reveal just how important millet was to the creation of cities and agricultural society, and also should make us think about millet in a different light.

Millet is an ideal supplementary crop; it thrives with minimal water, it has a very short amount of time from seed to harvest (only 45 days, compared with 100 for rice), and it can be farmed on hilly slopes easily. Between 2500 BC and 1600 BC, farmers began using millet as an integral element of “multiple cropping.” Multi-cropping is a way of growing multiple crops with a short overlap between growing seasons, so that a continual harvest throughout the year is possible. When the wheat season is over, the millet season can begin. That way, there’s never a time without food.

Millet’s short growing season and minimal environmental needs made it a perfect candidate to create the concept of multi-cropping, and the prospect of a continual harvest enabled people to leave nomadic lifestyles behind and create permanent settlements. With permanent settlements come cities, communication between cities and society.

Millet is best known in the developed world as birdseed, but new research finds that leaving it for the birds might be a great disservice to the grain. In fact, millet might actually be, in some pretty direct ways, responsible for the evolution of society as we know it. Millets are not only adapted to poor, droughty and infertile soils, but they are also more reliable under these conditions than most other grain crops. This has, in part, made millet production popular, particularly in countries surrounding the Sahara Desert in western Africa.

Today, millet is the world’s sixth most important grain. India is the world’s largest producer of millet, with eight African countries and China making up the rest of the top ten producers. 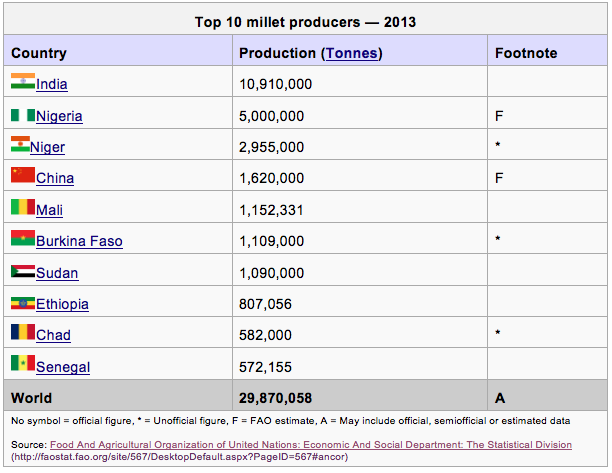 To produce good and quality millets, farmers need to have good management practices, which they can manage with AGRIVI software. In the system, farmers can track their whole production and protect their crops on time because pests can significantly reduce a yield or even destroy it.

AGRIVI offers a variety tools to help farmers manage their production. Beside record keeping and pest alarms, it has reports for each part of the production and also powerful analytics.

Millet is a gluten-free grain that’s high in antioxidant activity and magnesium, a mineral that helps maintain normal muscle and nerve function. Use AGRIVI and farm this life-saving crop.