Increasing of Food Production is Possible Without Deforestation

There is a common belief that providing food for the global population includes the need for more agricultural land, which leads to deforestation. Although forests still cover 30% of the world’s land area, about 10 million hectares of forest are lost each year, which is approximately equal to the size of Panama. According to the FAO (Food and Agricultural Organization), deforestation is one of the most widespread and important changes that people have made to the surface of the earth. The cumulative loss of forest land is followed with the global growth rate of human population. The trajectory of population growth and deforestation is shown in the picture below. 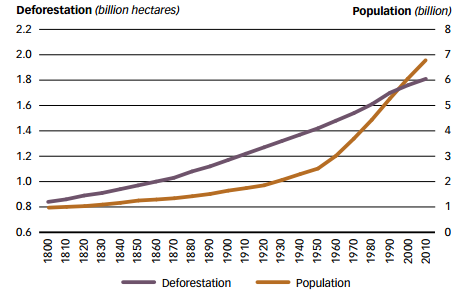 The connection between deforestation and global population growth

What Are the Main Causes of Forest Destruction?

There are many reasons why forests are cut down, but the biggest driver of deforestation is farming. The lack of arable land together with the growing demand for food have resulted in the clearing forests in order to provide enough land for crops and livestock. Many small farmers in tropical areas use the cultivation method called ‘slash-and-burn farming’. In this method, farmers clear forests by burning them and then in that ‘burned’ soil grow crops that are fertilized by the ashes. Soils managed with this practice produce only for a few years after which farmers move their crop production to new patches of forest. Other reasons for the high rate of deforestation include forest fire, fuelwood harvesting, mining, infrastructure construction, and unsustainable logging practices. It is also caused by illegal practices and poor forest management. The following picture shows the main reasons for forest destruction.

The main drivers of deforestation

There are many negative effects of deforestation on the global level:

Despite all of these negative effects, there is a common belief that deforestation is necessary to feed the growing global population by providing more space for arable land. Scientists do not agree. They claim that deforestation has caused the loss of a third of the world’s arable land since 1960.

What Can Farmers Do to Increase Their Production Without Further Deforestation?

Implementation of these practices can be facilitated with AGRIVI farm management software. AGRIVI ensures optimal usage level of every field with its field utilization overview. Farmers can also track all of their activities on the farm (crop rotation, irrigation, tillage, pest control, fertilization). The software gives farmers the best farm practices for the most significant crops – fruits, vegetables, and arable crops, with smart pest alarms to notify farmers on time when to treat their crops.

To feed the world without further deforestation, raise your yields by using AGRIVI.